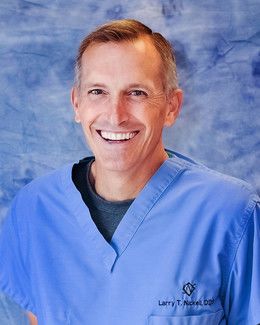 “I began practicing in 1985 and became a dentist because I wanted to directly touch the lives of my patients. I felt, and still feel, the need to contribute to the world in a very direct, hands-on manner.  Nothing does this better than dentistry. While I have worked in many dental offices, none are better than Forney Family Dentistry. The commitment to the patients, the integrity, and well as the sincere concern shown by everyone in the practice is second to none.” – Dr. Larry Nickell

Dr. Nickell finds it very rewarding to relieve the pain his patients endure. While they may be fearful of a root canal, they always appreciate the fact that they are no longer in pain. Relieving that pain is a way of improving someone’s life almost instantly, and it gives Dr. Nickell a great deal of satisfaction.

Dr. Nickell grew up in Plano and graduated from Wylie High School. He entered the US Naval Academy, where he majored in mathematics. He attended Austin College in Sherman and earned both a Bachelor of Arts in mathematics and a master’s in secondary education.

After deciding to enter the dental field, Dr. Nickell earned his Doctorate of Dental Surgery from Baylor College of Dentistry, where he was also inducted into the Odontological Honor Society. Dr. Nickell completed his formal education in 1994, with a Doctorate of Education in athletic administration from the University of Arkansas.

Dr. Nickell has been involved in numerous postgraduate learning opportunities in the fields of oral and maxillofacial surgery, as well as in advanced wellness, athletic leadership, and educational leadership. He has served as a faculty member at various schools, including Howard Payne University, Texoma Christian School, Austin College, and Grayson County College.

Dr. Nickell has lived in Van Alstyne the past 16 years. His wife Mary is the tennis coach at Austin College in Sherman, and they have five children. Larry, Jr. is an MD and radiology resident at Baylor in Dallas; Jon is in South Africa on a Rotarian Fellowship getting a second master’s degree from the University of Cape Town in human rights law; Robert has a real estate investment business in Dallas; Marc works for the Red Raider Club at Texas Tech, and is also working on his Ph.D.; and Jacqui, the only girl, is a junior elementary education major at Oklahoma State.

In addition to his career as a dentist, Dr. Nickell has also been actively involved in education: teaching and coaching on both the high school and college level for the past 30 years. Outside of work, he tries to stay as physically active as possible — running, working out, and playing tennis. He and his wife also enjoy traveling, especially on medical mission trips. They have been to Mexico, India, Honduras, and Africa with medical mission groups.

“This is by far the best service and office I've ever visited. The customer service is great, the facility is clean, organized, and up to date with technology. They have massaging chairs and you can watch TV above you while you get your dental work done. Perfect for easing the dental process.”